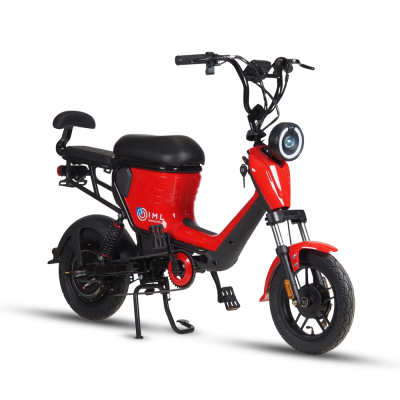 Of course, electric bicycles offer many of the same benefits that regular cycling does but because you’ve got an added bit of oomph on board, you’ll be able to travel greater distances and ride for longer.

They’ll also allow you to go faster than most cyclists and in some cases cars. Although modern motors can travel at 50 times faster than cars of 100 years ago, gridlocked roads mean that the average car speed in traffic hasn’t increased at all.

You can get up to 15mph almost instantly on an e-bike, while the average speed of cars in central London is 7.4mph!

According to a recent report by the Transport Research Laboratory, regular bikes make it out of the shed fewer than 25 times a year, with 46% being used just once or twice a week.

In comparison, 30% of people with electric bikes use them once a day, while a whopping 81% ride them at least once a week. Which means that e-bike users are twice as likely as regular riders to get out there and ride.

Because you’re riding more, you’ll be pedalling more – even if that electric motor is helping you out on occasion.

Which is good news for your heart, your lungs and your blood pressure because endless scientific studies have proven the link between regular exercise and reduced stress levels.

E-bikes are great, too, for people who love the idea of riding a bike, but feel they can’t because their fitness isn’t what it could be, or isn’t what it used to be due to age or illness.

You can pick up a new, decent quality e-bike from as little as £650 while upkeep costs are roughly the same as running a regular bike (for consumable parts like tyres, chains and brake pads).

In other words, far cheaper than buying, insuring and maintaining a petrol or diesel car, and a lot less than forking out for a season ticket or taking regular trips on public transport.

As for the cost of recharging your bike’s battery, we’re talking pennies when it comes to what it’ll add to your electricity bill.

Not only will they save you cash, they can also free you from the misery of either stalemated traffic or overcrowded trains and buses.

Even though you’re effectively a motorised vehicle, you don’t need a licence yet you’re still allowed to use the cycling lanes.

And because you can lean on that motor a little, you won’t work up too much of a sweat and end up arriving at work ponging like a sports sock. A long haul home after a hard day’s slog won’t look quite so daunting either!

Most bike accidents on the road take place at junctions such as crossroads or roundabouts. This is often down to the fact that it takes a few vital seconds for a halted cyclist to build up speed.

Having that little motor to help you accelerate will get you out of the danger zone faster. For the same reason, you’re also less likely to jump a red light because you won’t feel so aggrieved about having to abandon all that nicely built up momentum.

You’ll be more willing to slow for bends and corners, too – where most cyclists come off – because you can use the bike’s motor to accelerate out the other side.

Finally, because you’ll be able to keep up with the flow of traffic more easily, fewer cars, buses and lorries will need to overtake you, which also means safer riding.

E-bikes really come into their own when it comes to tackling climbs. Usually fitted with a variety of power modes to assist your pedalling, if you’re faced with a particularly arduous climb you can just crank your bike’s motor up to its highest setting and, despite the extra weight of the motor, breeze uphill like some sort of cycling superhero!

It’s one of the reasons e-bikes are growing in popularity among mountain bikers because it allows them to spend more time negotiating the downhills (the fun bit) than tackling the climbs (the somewhat less fun bit).

Having a motor to back you up also means that e-bikes are great for tackling that other great adversary nature throws up for cyclists – the wind.

By increasing the amount of power your motor kicks out, though, you can do a fair bit to stifle both crosswinds and headwinds.

E-bikes also make ideal touring bikes. Fatter tyres are standard and many have eyelets to allow panniers and racks to be fitted.

Which means riding long distances will not only be more comfortable but also more manageable, because again that motor can be called on to help out when the weight of your camping kit makes your legs feel like stopping.

Yes, riding an e-bike is similar to riding a regular bike, but once you engage the motor, you’ll find that every time you push on the pedals – depending on the setting you’re using – you’ll get three, four, five or maybe even as much as 10 pedal strokes more for your money.